I wrote a post last year on how to implement rotational backups, it worked great until I moved my backups to a VPS.

The problem was that in my previous implementation, I had other users RSYNCing their backups through their own SSH login, allowing me to secure my server through the various accounts; if someone hacked their SSH Key, they wouldn’t be able to access any of my data on the backup server.

In the VPS environment, you only get one SSH login per account. I could have used the same process but it would have meant giving root login access to other people, which I wasn’t happy with.

To get around the problem, I changed the process so that the rotation and the RSYNC delta was done through CRON tasks on the VPS and moving data from the source machine to the VPS server was done using the BitTorrent Sync tool, allowing me to not give keys out.

The same script would also backup folders mastered on the VPS, like my music library or website. 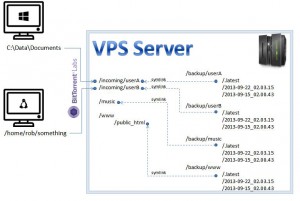 The script has 2 parameters: –

I’ve been running the backup for a few weeks and not encountered any problems.

6 comments on “Rotational Backups with Bittorrent Sync and Rsync”